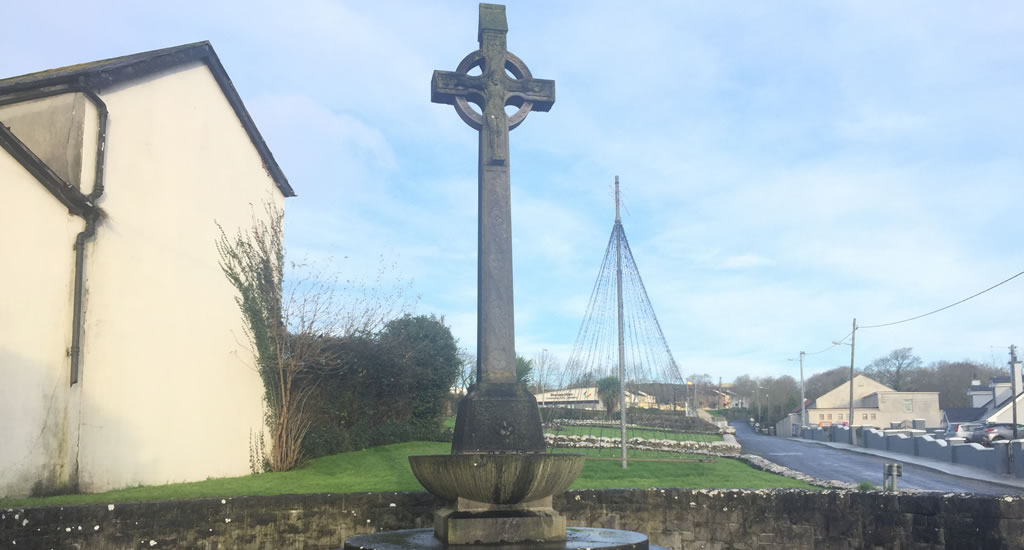 The Village of Shanagolden, which lies in the valleys beneath Shanid Castle, the first Norman fortress built in Munster in the 1200’s.

‘Seanghulainn’ the Irish for Shanagolden means “old shoulder” which refers to the hills overlooking the village. This village of ours first became a settlement after Queen Elizabeth’s army drove the Fitzgerald’s Earls of Desmond from the Norman castle and destroyed it. The people were then forced to move and when the landlords arrived during the Munster Plantation, Shanagolden became one of the first Elizabethan village’s in the region, possibly around the early 1580’s.

Our village today still has the characteristics of the Elizabethan times, which were put in place during the Munster Plantation. There is a wide street with a green area, which was once a market place, and still today at the lower end of the street is the traditional square.

The village of Shanagolden our community has changed over the years but certain things remain. Traditional family names, historical sites, townlands, some buildings, our school and the village stream, Moloney’s river which ripples its way to the Shannon.

The monument at Shanagolden that stands within the space at the northern end of the main street commemorates a male member of the Spring Rice family, Stephen Edmond, a son of the second Baron Monteagle.

The inscription on this monument reads as follows “To the glory of God and the memory of Stephen Edmond Spring Rice, who died on the seventh day of April 1900, aged 22 years.”

The Norman Invasion of Ireland took place in the autumn of 1169 and the spring of 1170. Many soldiers and knights arrived with Strongbow during the invasion. Thomas Fitzgerald arrived in West Limerick and decided to build a fortress on a hillock beside an ancient ring fort in Seanaid.

The Fitzgeralds built an artificial mound of clay 35ft high on top of the existing hill. The castle was unique, it is polygonal in shape, circular inside and the walls were 11ft thick. It was in fact the only type built in Ireland by the Normans.
On the eastern side of the castle, there was a D-shaped bailey. This was a yard or enclosure which had a rampant and ditch and this gave protection to soldiers and their animals.

John Fitzgerald, son of Thomas had a nunnery of St. Catherine built and this became known locally years afterward as the Old Abbey of Shanagolden.
For many years, Shanid Castle was a symbol of the great power of the Fitzgeralds-Earl of Desmonds. Their famous war cry “Shanid Abú” led them to many successful battles as they conquered and acquired more and more lands in north Munster.

During the reign of Queen Elizabeth 1st, the Fitzgeralds fell very much out of favour. During the wars in Munster which followed from 1569 onwards, the Fitzgeralds lost much of their possessions. Shanid Castle was attacked and forced to surrender and it subsequently fell into ruins.

After the defeat of the Fitzgeralds, the Plantations of Munster followed. New landlords loyal to Elizabeth received huge grants of lands. Shanid Castle and the surrounding lands became the property of William Trenchard. The image of Shanid Castle forms part of our school crest.